The Case For BAND-AIDs

A laceration or cut is damage to the epidermis (outer layer of skin cells) and vasculature (blood veins), and depending on the depth of the damage, possibly the dermis (the thick layer of tissue below the epidermis containing blood capillaries, nerve endings, sweat glands, hair follicles, and other structures) and underlying tissue.

The layers of skin form a protective barrier against bacteria and viruses; cuts create the opportunity for blood loss and infection. Though major injuries need stitches to close the skin, minor cuts and scrapes repair themselves. Blood fills the open area and coagulates, forming a protective covering called a scab to cover the wound, allowing the body to form new skin over the area.

Bandages or dressings are a strip of natural or manmade material placed over a wound to create an artificial scab preventing excessive blood loss and protecting the cut until it heals. Natural fiber bandages, like cotton gauze, shield the area from debris and further damage. Semi-permeable plastic and vinyl film bandages go a step further and prevent thick scabs from forming. Natural scabs are brittle and often break open during movement, creating another opportunity for infection. Recent clinical studies have shown cuts kept moist with petroleum jelly or antimicrobial ointment and a protective covering heal significantly faster than those left exposed. Newer adhesive bandages draw liquid and blood away from the area, while defending it from germs and debris.

Humans have known the benefits of covering open wounds for generations through empirical observations. The next section discusses the different healing techniques of the past from around the world.

Breaking the body’s protective layer of skin presents an opportunity for potentially deadly infections and harmful debris to enter the bloodstream, along with the threat of blood loss. Though the discovery of bacteria and viruses is relatively recent, humans have had effective remedies for infections for centuries across different cultures and civilizations.

In ancient Egypt, wounds were initially cleaned using antiseptics and astringents like copper salts, calamine, malachite, and date wine. Bleeding wounds were treated with fresh meat packed into the wound. While this may sound odd, the muscle fibers from the meat contained coagulants that helped stop bleeding (this treatment even appeared in more modern medical texts into the 1950s). Infections were treated with moldy bread packed inside a wound. The organisms that grew on the bread acted like penicillin (an antibacterial medication derived from fungi).

For the Egyptians, an open wound was an invitation for spiritual trouble, too, as a possible entry point for mischievous entities. Feces from donkeys and other grazing animals was applied to the laceration as a repellent against supernatural troublemakers. Though this remedy may seem counter-intuitive, the feces may have contained many antibiotic substances and proteins like trypsin that can help with healing. 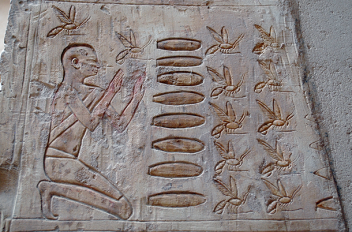 Part of a beekeeping relief at Pabasa’s tomb. (Gene Kritsky)

Wounds in MesoAmerica were washed with fresh urine which is sterile and treated with plants that contained styptic compounds that stopped bleeding. Bleeding injuries were dressed with a poultice of concentrated maguey agave sap, egg whites, and salt to prevent infection. Spider web silk was an effective bandage that stopped bleeding. The main medical goddess, Tzapotlatenan, gifted her people with pine resin. The resin was mixed with turpentine to create an ointment known as oxitl to treat wounds, along with scars, itches, and other skin diseases. Pine resin is still used today in commercial dandruff shampoos.

Like the Egyptians, Meso-Americans had also discovered their own antibiotics. Wet tortillas were left to grow a green coat of microscopic mushrooms then placed on infected wounds. Other Indians of the Americas used antibiotic plants like yarrow, sage, cranberries, and blueberries and plant fiber, wood or bark strips to cover wounds and allow for drainage.

In China, bronze instruments, green tea, licorice, soaked mushrooms, antiseptics and other herbal powders guarded against infection. Honey was used to kill bacteria. The hygroscopic property of honey to absorb or attract moisture from the air and wounds was not only known in Asia, but around the world.

Besides bandages, honey is one of the healing substances that transcend time and culture. Products infused with honey, like MEDIHONEY® wound dressing, are still widely used today. 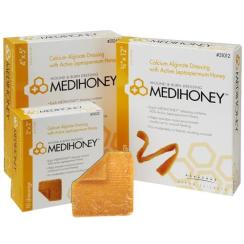 Bandages of one sort or another have also been used for the entirety of human history (perhaps even longer if we include Neanderthals). The Greeks used wool boiled (and incidentally sanitized) in wine or wine. Samoans cleaned wounds with salt water and wrapped them in leaves. The Chinese used silk and gauze. While adhesive bandages may sound like a modern invention, resins and saps have provided the needed stickiness for covering wounds with leaves, papyrus, or cloth for thousands of years.

Many cultures also used plasters, a bandage covered with medicinal mixtures of mud or clay, plants, and herbs, to protect injuries and to absorb fluids like blood and pus. Later plasters used rubber as the bandage backing. Oil, a common ingredient, also  provided a bit of protection from infection because bacteria grow poorly in oil, and it prevented the plaster from sticking to the wound. Additionally, medicated plasters were used to relieve pain and provide heat for other types of injuries. Plasters, like adhesive bandages, are still used today.

Top image: Achilles tending Patroclus wounded by an arrow, identified by inscriptions on the upper part of the vase. Tondo of an Attic red-figure kylix, c. 500 BC. From Vulci. (Wikimedia Commons)