Where does our trash go? For most Americans, household trash simply disappears after it is put out for curbside pickup. In the past, trash did not disappear; rather, it was everywhere. By the early 1800s, many rural farmsteads were strewn with rubbish, dirt, and animal refuse accumulated over decades of human habitation. In 1819, the reformer Josiah Quincy noted that even the front yard of the typical home was a disgrace, consisting of an “inlaid pavement of bones and broken bottles, the relics of departed earthen ware, or the fragments of abandoned domestic utensils” (Massachusetts Agricultural Journal, January 1820, p. 5).

Archaeology confirms that this was no joke. It was not until the mid-1800s that many households began to practice more discrete trash disposal, such as the use of specially-dug pits located in remote areas of the yard. Until then, Americans threw their trash wherever was most convenient. Broken dishes were tossed out the nearest door or window, while bones and other kitchen refuse were discarded in the yard where pigs, dogs, rodents, and other animals picked them over. 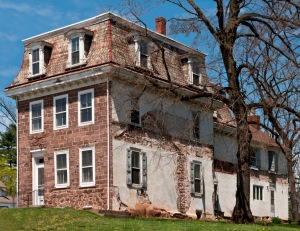 The Speaker’s House with outline of the store addition on the gable wall.  Photo, Gavin Ashworth

This virtual exhibit focuses on The Speaker’s House, located in Trappe, Montgomery County, Pennsylvania, as a case study of disposability in early America. Built in 1763, The Speaker’s House was the residence of Frederick Muhlenberg, first and third Speaker of the U.S. House, from 1781 to 1791. The property was also the site of a general store, located adjacent to the main house, which the Muhlenbergs operated from 1782 to at least 1800. Archaeology has provided insights into the family’s household consumption and disposal practices, while documents, architecture, and artifacts help to interpret what the excavations have found.

This exhibit is organized into six sections: 1. Meet the Muhlenbergs; 2. Cooking; 3. Dining; 4. Smoking; 5. Drinking; and 6. Further Resources. After introducing the Muhlenberg family, the remaining sections explore artifacts found during archaeological excavations at The Speaker’s House and situate them within a historical context. The further resources section provides a list of recommended websites and readings for more information.

One thought on “Trash in Early America”