The Chrysler Newark Assembly Plant, before and after demolition. In the United States, disposability extends even to the built environment, and industrial infrastructure is particularly susceptible. The image on the left shows the site as it appeared circa 2002, the image on the right shows the site after demolition, circa 2012. Note the enormous footprint of the plant, 3.4M ft² or 78 acres, the highway connections to the south and east, the railroad siding to the north, and the surrounding residential and green spaces which form the environmental context of the site. Image credit: © 2002, 2012 United States Geological Survey.

The physical shape of the plant created a distinctive work experience for employees, including the stifling heat of summer. Organization of the line also created work groups, the building blocks of factory community that in some cases outlived the plant itself. Image credit: University of Delaware Library Special Collections. 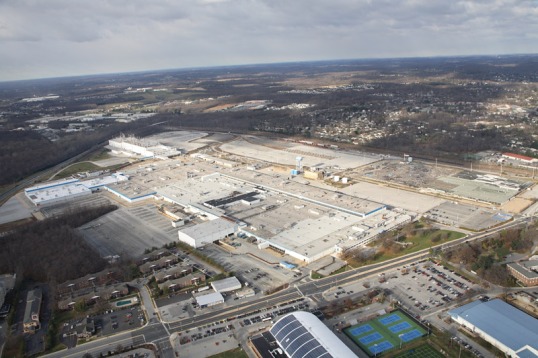 An aerial view of the Chrysler Newark site, circa 2010. The sprawling complex shaped the daily experience of hundreds of workers. This image illustrates how the plant was embedded within the surrounding built environment, and suggests its prominence in the development of local community. Note the residential development at top right, much of which was constructed as housing for plant employees, including those along Chrysler Avenue. Image credit: © 2011 Greg Sachs, http://www.udel.edu/star/archive-photo-gallery.html 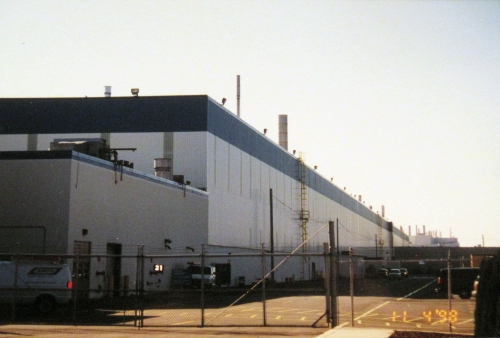 Architecturally, the Chrysler Newark Plant was an enormous shed. It was massive, modern, metal, and mechanized. As suggested by this image, the whole building could not be viewed at once from the ground. Image credit: University of Delaware Library Special Collections. 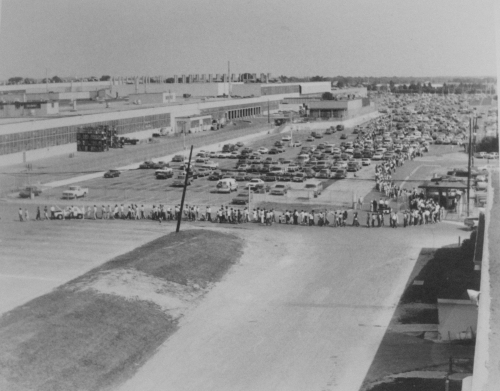 This image shows a portion of the Chrysler Newark plant and its surroundings, circa 1984. The people lined up are there for Family Day 1984, an event that brought the larger community into the plant for hot dogs, raffles, and work exhibits. Image credit: University of Delaware Library Special Collections. 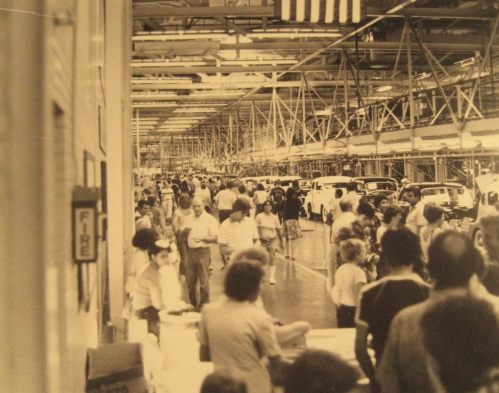 Crowds of locals rub shoulders on the factory floor during Family Day 1984. The structure of the plant is revealed by the crisscrossing girders, the artificial lighting, and the convergence of lines toward a distant vanishing point. Image credit: University of Delaware Library Special Collections.

During the 1990s, the plant instituted a recycling program. Although the program may have helped reduce the environmental impact of plant activities, the company likely initiated it to clean up the plant’s reputation, which had suffered from repeated fires, improper disposal of chemicals resulting in the contamination of local groundwater, and the discharge of air pollution, for which Chrysler received large fines from the Environmental Protection Agency. Image credit: University of Delaware Library Special Collections. 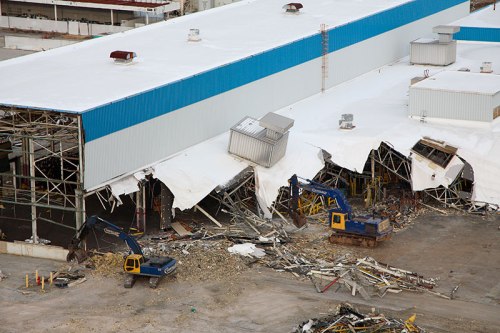 A dramatic image of the demolition of the plant, circa 2010. This image shows us how the building was put together and how it got pulled apart. Note that the demolition engines sport Delaware colors, symbolic of the University of Delaware’s role in disposing of the plant. Image credit: © 2011 Greg Sachs, http://www.udel.edu/star/archive-photo-gallery.html 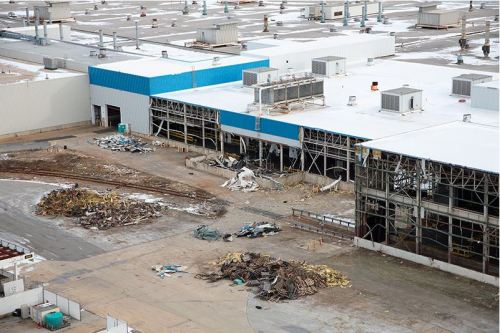 As demolition progressed, the building’s components were recycled, which involved disassembling, sorting, processing, and selling it on the international market for wreckage. Note the piles of material in the front center. Image credit: © 2011 Greg Sachs, http://www.udel.edu/star/archive-photo-gallery.html 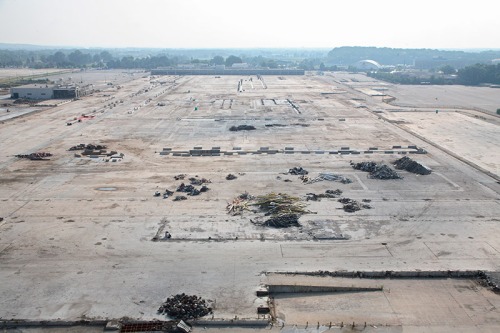 Aerial view of the Chrysler Newark site after the demolition, circa 2011. This is what the University of Delaware bought, for good and for ill. Image credit: © 2011 Greg Sachs, http://www.udel.edu/star/archive-photo-gallery.html

A special thanks to Mack Trucks for allowing the recording of the distinctive sounds of vehicle assembly in their Macungie, Pennsylvania facility.