When was the last time you went to the doctor for a cut finger or a skinned knee? Like today, people in the early America did not seek professional medical attention for many injuries unless it was absolutely necessary. Women served as primary caregivers for the household and attended to everyday bumps, bruises, and abrasions. Health care knowledge was passed down through the generations, along with family recipes for medicines and ointments. And like today, some of those women collected and shared their recipes through print.

Receipt books (commonly known as cookbooks today), contained more than recipes for mince pies and hasty pudding. The books provided women with helpful advice for caring for the sick and injured, tips on “purifying” or deep cleaning spaces and objects, and recipes for styptics, burn creams, healing ointments, and adhesive plasters and bandages.

Maria Eliza Rundell (1745–1828), the bestselling British author of cookbooks, included two recipes for styptics in her 1811 book The New Family Receipt-book: Containing Eight Hundred Truly Valuable Receipts in Various Branches of Domestic Economy. The first recommended the use of spider webs or silk worm “woof” to stop bleeding and heal a wound in three days (p. 300). If those were not readily available, a mixture of brandy, castile soap and pot-ash would work as well. 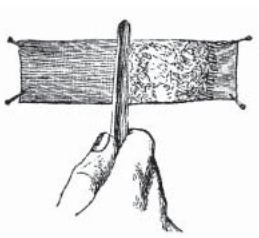 Illustration showing how to scrape lint from Henry Hollingsworth Smith’s Minor Surgery: or Hints on the Every-day Duties of the Surgeon, 1850.

Mrs. Shaw suggested a simpler approach to treating boo-boos. In her 1878 receipt book, she recommends washing away the dirt and debris and pressing the edges of the wound together for five minutes. The next step is to hold the laceration closed with well-warmed adhesive plasters about five or six inches long and a third of an inch wide. Finally, he whole treatment is protected by a fold of soft, clean linen (p. 192). Threads from old linen could also be unraveled into frayed and absorbent bandages called “charpie.” Lint, a soft material prepared by raveling or scraping linen cloth, was also a common wound dressing that could be made at home.

Other herbal guide books recommended balsam resins, distillations of oak leaves, poultices of wild sage and “creeping mouse-ear” (a species of chickweed) to stop bleeding. Ointments of frankincense, aloes, egg white, and “hare down” (rabbit fur) were good styptics and kept the wounds moist. Women consulted this herbals and recorded their results in diaries and journals.

Receipt books written by men often prescribed more “medicinal” treatments. In the 1808 book, The Family Receipt-book; or, Universal Repository of Useful Knowledge and Experience in all the Various Branches of Domestic Economy, the editors recommend using an ointment of olive oil, white lead, camphor, and light yellow beeswax spread on linen and applied to the area. They state that the treatment should be reapplied every 12 to 24 hours, taking great care not to expose the wound to the air (p. 570). For infections, the editors of 1829’s MacKenzie’s Five Thousand Receipts in all the Useful and Domestic Arts suggest bleeding and purging along with applications of wine, porter, brandy, and opium (plus a “generous” diet.)