Image of a roll of cellophane. Accessed via Wikipedia Commons. Uploaded on December 7, 2014.

The story of American cellophane begins not in the United States, but rather in the French laboratory of Jacques Brandenberger at the turn of the twentieth century. Brandenberger, a Swiss chemist, worked to discover a way to shield tablecloths from dirt and stains using a substance called “viscose.” Viscose was the gelatinous form of wood pulp from the Spruce tree after the pulp had been dissolved in a chemical bath. Once the pulp was dissolved, the substance then was pushed through a metal slit into another acid bath that solidified the gel “just as the white of an egg does when it is brought into contact with boiling water.”[1] Although the original product resembled a brick more so than a sheet, he managed to obtain a thin, flexible, and clear product by 1912.

Brandenberger did not accomplish his original goal of coating tablecloths in viscose as a protective layer, but his work did yield a material that could protect far more than cloth. The DuPont Company realized the potential of a water-proof material that seemed to protect anything from dirt, dust and germs. In 1923, the company obtained the rights to produce viscose sheets using the “Brandenberger process,” as well as the right to call their product “Cellophane” in North America.[2] By 1924, the first American cellophane manufacturing plant was up and running along the Niagara River in Buffalo, New York.[3] Seen below are illustrations of the cellophane production process [4]

Although it performed the task of protecting dry consumer goods from dirt and germs well, the first version of cellophane had two critical flaws that prevented its adoption and acceptance by businesses and consumers. The more immediate problem was the price. Throughout most of the 1920s, a pound of cellophane cost businesses and manufacturers approximately $2.65 per pound.[5] Thus cellophane was used mainly as a wrapper for luxury items such as candy boxes, beauty products, tobacco, and medicines, because it was nearly twenty-five times as expensive as pre-existing wrapping materials![6] 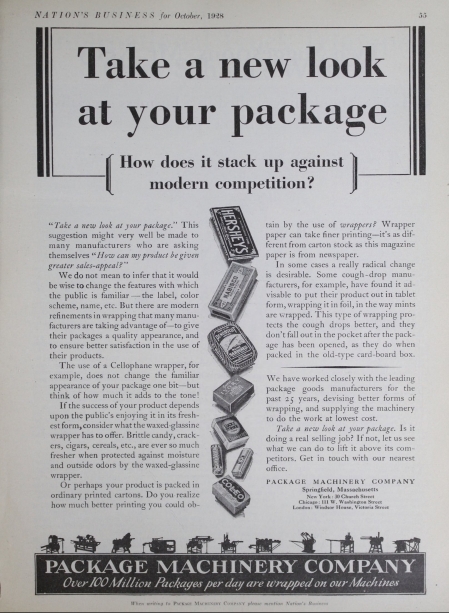 Ad detailing how cellophane can improve the quality of a product without actually improving the product itself, 1928 (Nation’s Business magazine, Published Collections Department, Hagley Museum and Library, Wilmington, DE 19807).

Even though DuPont marketed the product as a way to preserve the cleanliness and dryness of food and household goods, as seen in the advertisement above, the cost of cellophane prevented its use in these other markets [7]. In addition to the expense, cellophane was only water-proof rather than moisture-proof. The material kept water out, but it did not preserve the moisture inside the package, leading to stale and spoiled foods. Waxed paper still won the day in this regard: “Plain Cellophane proved to be so much less moistureproof than waxed paper that cakes wrapped in it dried up at once. From cakes, then, du Pont had to beat a retreat.”[8] Throughout its first years of production in the United States, cellophane’s physical qualities limited its function to keeping luxury goods clean, dry, and sparkling.