Cellophane wrapper from the Lavoisier collection at the Hagley Museum and Library, ca. mid-twentieth century

Businesses might have fallen in love with cellophane’s potential to boost sales and reduce waste, but consumers still needed to be convinced to let go of older packaging materials such as waxed paper. In order to identify popular opinions about cellophane, producers hired outside marketing experts such as the ubiquitous Dr. Ernest Dichter in the 1940s and 1950s to gather unbiased data from focus groups and consumer interviews. What they gathered revealed that DuPont, Sylvania, and Olin (the three largest producers of American cellophane) needed to overcome a number of consumer misunderstandings about cellophane and psychological associations with older wrapping materials.

Cellophane was too new and unfamiliar. One housewife reported that “it is true that wax paper has a familiar ring for me…mother used it to wrap our homemade cheese.”[1] Many shoppers believed cellophane made natural products look artificial, and the ability to see a product such as white bread through the packaging actually raised concerns about obscenity due to the product’s “nakedness.”[2] Consumers disliked cellophane’s lack of durability: “When the bread is taken out of a Cellophane wrapper, all that’s left is a very nasty and poor looking little ball of debris or trash which you throw away without hesitation.”[3] Wax paper could be reused and re-purposed, making it the favored product among waste-conscious housewives. Further, many consumers misunderstood cellophane’s physical properties. They often believed the wrinkles in cellophane signified an old, fragile product, and the crackling noise made by cellophane when handled convinced many people that cellophane was brittle enough to shatter.[4] 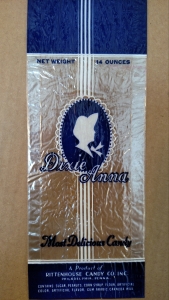 Cellophane candy wrapper from the Lavoisier collection at the Hagley Museum and Library, ca. mid-twentieth century

Cellophane bread wrapper from the Lavoisier collection at the Hagley Museum and Library, ca. mid-twentieth century

Marketers’ research, on the other hand, did discover many positive reactions to cellophane. Consumers appreciated cleanliness and purity. In one passionate interview, a 45 year old secretary declared, “I never buy unwrapped bread…bread passes through so many hands: the people who make it, who deliver it, the clerk who receives it, and then the one who sells it.”[5] They liked the seductive shimmer and shine of cellophane, going as far as to compare aisles of wrapped bread to jewelry store windows displaying diamonds. Many shoppers also enjoyed exploring and investigating a product with their physical senses before buying it. The act of exploration had an arousing quality to it that shoppers loved. As Ernest Dichter put it, “thin, transparent, closely fitting wrappers stimulate his imagination, make his fingers curious.”[6] Through these studies, cellophane producers gained valuable information about the public’s preferences and concerns, giving them a foundation on which to plan marketing campaigns.

VIII. Selling it to the Masses⇒