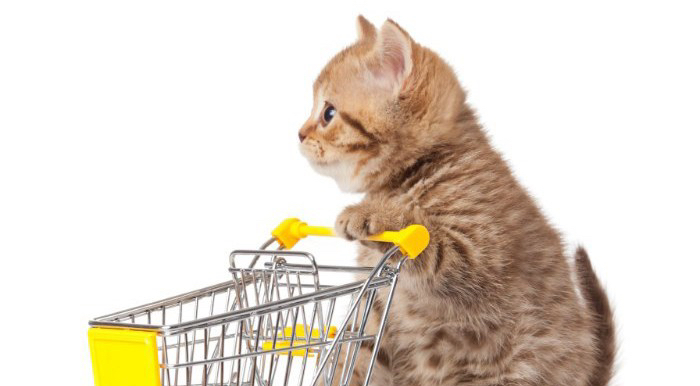 Where did shoppers purchase cat litter in its early days? Who took over litter duties at home? And how did human caretakers clean the boxes? If you’re asking yourself these questions, then keep on reading.

The section on Ed Lowe shows that  cat owners purchased their litter in many places, including specialized pet stores and, more often, the grocery aisle. Cat litter sales benefited from the supermarket boom of the 1950s and 60s, when larger, more streamlined stores, carrying a cheaper and wider variety of goods, proliferated in the suburbs.

Purchasing cat litter, however, was an everyday task for Americans in all walks of life. In the pages of the newspaper, cat litter joined the list of grocery items like peanut butter, cleaning supplies, and orange juice that were advertised on sale. 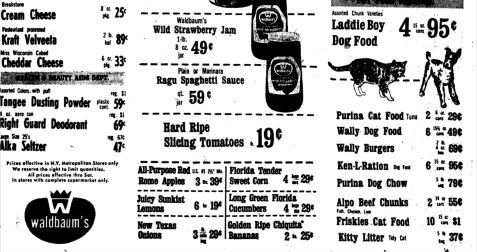 A May 1967 grocery ad, in which cat litter is advertised alongside tomatoes, deodorant, and strawberry jam, in the New York Times.

For example, in 1967, one ad for Waldbaum’s, a local grocery chain then serving Brooklyn and Queens, advertised a five-pound bag of kitty litter at thirty-seven cents, alongside cat food, tomatoes, cheese, and deodorant. Offering bags in five- or ten-pound bags suggests that shoppers walked to and from their neighborhood stores. A 1968 ad for Pantry Pride’s Mondawmin, Baltimore location—a historically middle-class African-American community—offered a ten-pound bag of Hartz Mountain litter for forty-nine cents in the Afro-American.

Above: Cat litter advertised among other grocery items, like yams, napkins, and boil ‘n bag meats, in the (Baltimore) Afro-American, 1968.

West coasters, too, had their share of cat litter, as evidenced by a 1963 Los Angeles Times ad for the large grocery chain Ralphs, which promoted five-pound bags of Jonny Cat Cat Litter for a mere thirty-nine cents each.

But did female consumers respond? In fact, they did. The complaint letters (and Lowe’s responses) kept from 1960 in the Edward Lowe Foundation Archives were all sent by women, listing concerns about changes to Kitty Litter that took both their own comfort and their cats’ into consideration. One Mrs. Gover from Pennsylvania wrote to complain about a sudden “increase in odor and dampness” in the latest batch of litter. Another owner of “ a Siamese cat three years old” complained about her “acting very strangely…frantically [licking] her paws and…twitching so badly that I thought she was going to have a fit” after using the box. One Cedar Rapids, Iowa woman wrote in complaining about the new litter’s “sharp edges that can be very injurious to the feet of a cat. In fact, my beautiful Persian fussed all day with his feet.” And a Florida resident wrote to the company to report on the quality of its Aristo Cat litter, its main difference being “there is no dust in this brand than the others,” a detail that would impact the cleanliness of her home.

In the 1970s, as the women’s movement argued that men should take on a bigger role in housework, the division of feline-related tasks seemed to become more equitable. In 1977, one husband attested in Billy Rowe’s New York Amsterdam News column that he gladly took on half of the household chores, including “marketing, cleaning, washing, and [taking] out the kitty litter.” And in a 1972, the New York Times published a day-in-the-life piece of a woman raising her (human and feline) family with the help of welfare funds. Among the daily tasks of shopping and caring for her children, her boyfriend contributed to the household labor by “[bringing] kitty litter and [looking] in on the children.” Although marketers frequently appealed to cultural assumptions about women’s work and tastes, by the 1970s, both men and women (and likely children) contributed to the care of feline family members’ sanitary needs.

Litter-ary Objects: Reducing the Annoyance of the Cat Box

Cat litter stood (and still stands) at the center of an entire constellation of related objects. What is litter without its tray or scoop? By looking at a few of the items orbiting cat litter, we can come to understand how people have attempted to reduce the annoyance, smelliness, and discomfort of disposing of cats’ urine and feces. As early as 1941, in the days of the sandbox, Lord and Taylor sold a cat privacy screen to help hide the cat box, likely marketed to apartment dwellers. Along with a scratching post and covered wagon bed, the upper left hand corner featured a three-paneled screen that came in green, red, and blue trim, to match the decór. The description speaks to the need for “privacy for puss—her pan and self discreetly concealed behind a cork screen.”

After cat litter hit the market, select pet catalogs continued to sell the privacy screens. Among the many products featured in a 1950s cat catalog that Katherine Grier details in her blog, The Pet Historian, is a privacy screen with images of a Siamese cat on each of its three panels.

The cat scoop or shovel, was, and still is, an essential item of litter usage. The Edward Lowe Foundation Archives feature catalog shots of a slotted metal scoop and accompanying round pan (below). 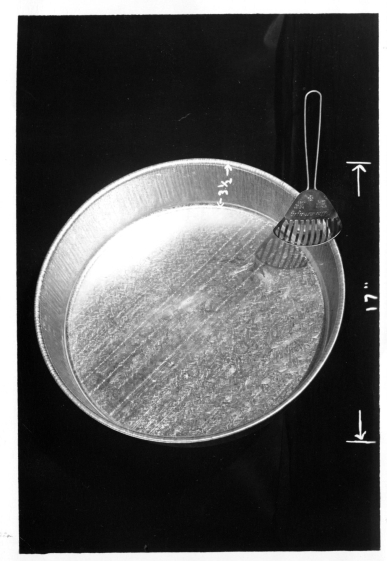 The cat scoop became so well known in American culture that one Q&A in the Chicago Tribune referred to using a cat scoop outside with dogs: in 1976, an Evanston resident wrote in asking about a recent “city ordinance requiring dog owners to walk their pets on a leash, and also to carry a litter scoop.” Litter scoops, of course, are associated with cats—since dogs don’t use litter to do their “business”—but their perceived usefulness outside the cat box speaks to their ubiquity. Cat litter packaging, too, could be an object for better cat litter usage. As evidenced by archived correspondence, members of Edward Lowe’s company and Frank Dittrich of All Pets Magazine discussed selling cat litter in boxes instead of bags, so that the boxes could be used as disposable cat trays. Lowe’s later called it their Tra-Box.

A Litter Genie to help store kitty detritus without the smell, via Chewy.com.

But what to do with the scooped urine and feces? Inventors have devised solutions for that too, eliminating the problem of clumps in the trash, or of taking bags out to the trash daily. In a marketing move that gives credence to pet owners as “pet parents,” the Diaper Genie has been adapted for cats, in the form of the Litter Genie.

An advertisement for the Environ-Aire Odor control System, in the Wall Street Journal, 1980.

Other entrepreneurs and manufacturers created objects to tackle odor, arguably the most troubling aspect of cat elimination. In 1980, the Environ-Aire filter claimed to eliminate odor from a number of sources, including “Animal odors—kitty litter odors.”

“The Best in Cat Care” spread in the Animail pet catalog (1988), including a covered litter box for kitty privacy and human noses, courtesy the Hagley Museum & Archives.

Litter boxes with lids were another solution.  They both reduce odor and provide greater privacy, as seen in this ad from a 1988 Animail catalog, shown above. 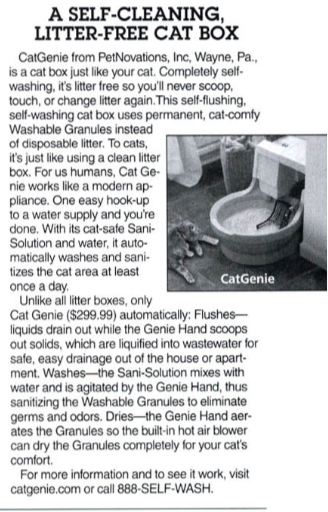 Self-cleaning litter boxes eliminate the scooping process, streamlining the shift from cat elimination to trash collection—and some even litter-free, as with the product advertised in USA Today (2007). Newer models, like the “Litterfish” box, bring a bit of whimsy to cats’ bathroom process. 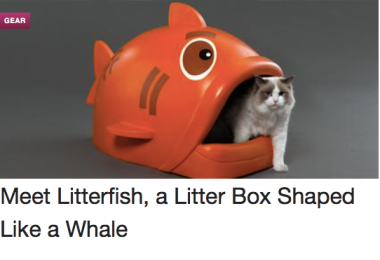 For a short time, this whimsical “Litterfish” litter box was sold to cat owners who wanted a little fun in their cats’ bathroom duties. Sadly, the Litterfish is no longer available.

After Ed Lowe’s invention became commonplace in millions of American homes, cat litter became as everyday as picking up a bottle of mustard at the supermarket. Taking care of the litter box can be an onerous and odorous task—for women, in the 1940s–1960s, and men, starting in the 1970s. In response, companies, entrepreneurs, and cat owners alike have sought ways to make the task of scooping feline “eliminations” more streamlined, less smelly, and even playful.

Next: Cat, Human, and Environmental Health