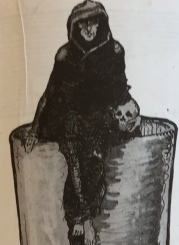 “War is Declared on Drinking Cup.” “Death in Drinking Cup.” “The Cup of Death.” These are the just three of the headlines from newspapers across the United States in the first years of twentieth century. But why this sudden assault on a seemingly harmless object that helped people quench their thirst?

Prior to the invention of the disposable drinking cup, thirsty train passengers, theater-goers, office workers, or school children were forced to go to the nearest water bucket or cooler and use a “common” or “public drinking cup.” This cup, most often made from glass or metal, was left near the water and shared by anyone who needed a drink. On the street, as the photograph below demonstrates, outdoor fountains often had metal cups fastened by chains. 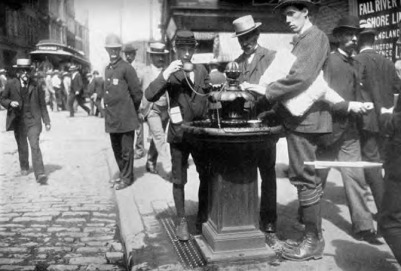 Not until the Progressive Era and increased public understanding of germ theory did the crusade against the common drinking cup begin. As part of public health initiatives, scientists and activists began doing experiments to demonstrate the dangers that lay in this common object. Dr. Samuel B. Crumbine, a Kansas public health physician, began the crusade to eliminate the common drinking cup after having an experience on a train. Crumbine was traveling with one of his tuberculosis patients in 1907. He watched his patient take a drink of water out the common drinking cup in the railroad car. He then watched as a young girl drank out of the same cup. Appalled, Crumbine began campaigning to ban the use of common cups and other public utensils across the state. Soon, images like this one from 1909 began appearing across the United States as physicians, academics, and public health officials began presenting the dangers of the public drinking cup. In a series of advertisements, these images served as demonstrations of the types of people who could be using the cup before you. After seeing such a frightening image, how could a mother give her children water from such a glass? 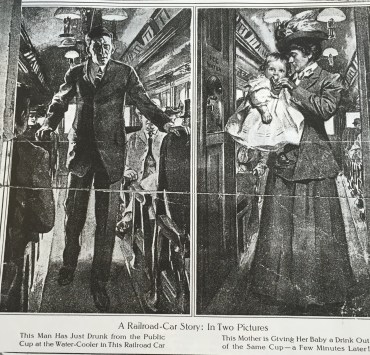 Many experiments were done to test and prove the quantity of harmful bacteria that could be found on common drinking cups and soda fountain glasses even after being ‘sanitized’ by washing. In one article on this research, Professor Davidson of Lafayette College reported that “When any one uses a drinking cup germs pass from his mouth into the cup, and they are taken into the mouth of the next person who drinks.” Pamphlets, booklets, magazines, and newspapers displayed terrifying images of death stalking users of common cups along with stories of the diseases being spread through their use. In another chilling image that was distributed by the Minnesota Board of Health, the common drinking cup is made in the likeness of a skull. After seeing images like these, citizens of the time wondered how they could continue to let their children drink from those promiscuous disease-laden receptacles. 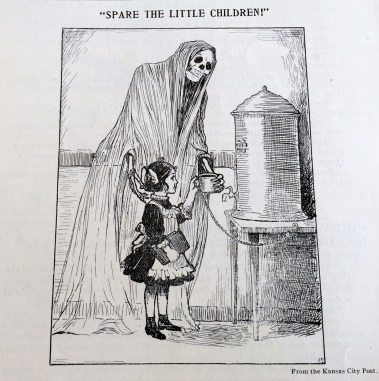 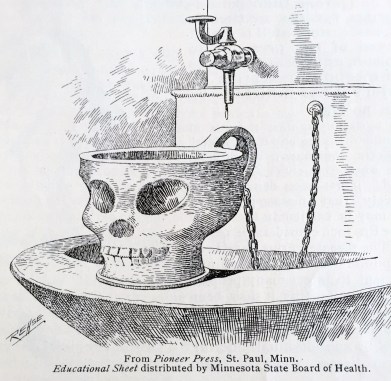 Eventually common drinking cups were outlawed in most states with Kansas leading the charge against this “public enemy.”As shown in this image from The Cup Campaigner, a publication including reports and articles on the crusade to banish the public drinking cup, an army of public health officials and activists were on the march against this public hazard. By 1911 the common drinking cup was abolished in 7 states by law and at that time 30 additional State Boards of Health condemned its use. By 1911 over 40 railroads had stopped using the public drinking cup. By 1912 24 states had outlawed the common drinking cup with what the New York Times termed “The Drinking Cup Law.” New York City forbid “the use of a common drinking cup or receptacle for the drinking of water in any public place or in any institution, hotel, theatre, factory, public hall, or public school or in any railroad station or ferry house in the City of New York or the furnishing of such common drinking cup or receptacle for use in some place.” Breaking said law was a misdemeanor. 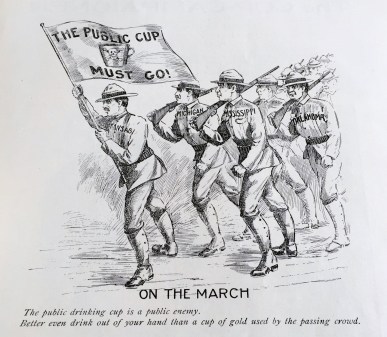 But what were people to do if they were thirsty while away from home? The “common drinking cup has had its day,” wrote one critic; now it was time for a new product to knock out the germ-filled cup. 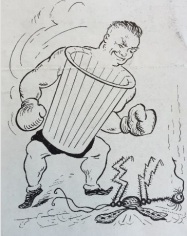 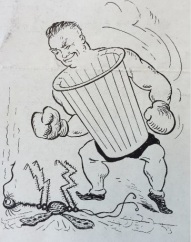