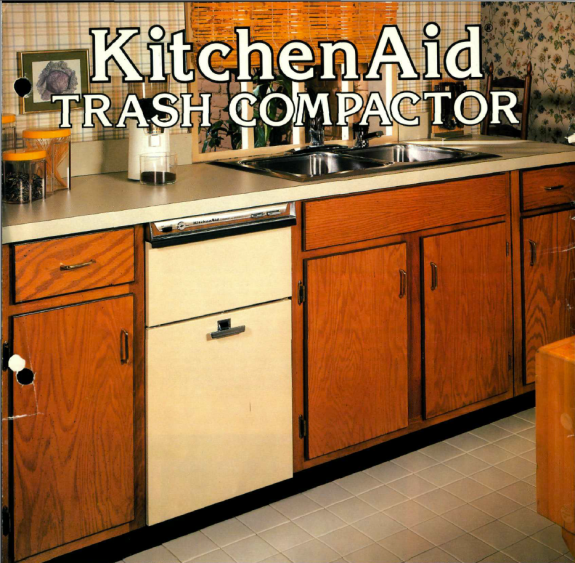 Trash compactors were inevitably placed in the kitchen, the historical epicenter of waste production within the home through the work of processing raw foods into meals. However, over the course of the twentieth century, the kitchen was increasingly linked to external political,  economic, and cultural forces through its high capital, high technology, and high design elements. The trash compactor, a complex technology originating in response to a national waste crisis and municipal budget concerns, was a small part of this trend. Furthermore, kitchen renovations were hitting new peaks at the time of the compactor’s introduction, and the appliance industry hoped to add them to the ‘must haves’ of the modern kitchen. In 1971 one purveyor of trash compactors and other kitchen appliances observed, “remodeled kitchens are increasing at an annual rate of 2.7 to 3 million. Homeowners now spend an average of $3,500 to $5,000 on the one room that a trade magazine says takes top priority among 60-65 percent of the people who plan to remodel their dwellings.”

The trash compactor was not just an inhabitant of the kitchen though, or furniture within it; more often than not, compactors were part of structure and the design. To explain, compactors were sold with two main options: free-standing (marketed to those who could not remodel their kitchens) and under-counter. Free-standing compactors never achieved the popularity or appeal of the under-counter models; 80% of the market in 1987 was in under-counter units. Modern-style kitchens worked toward monolithic and modular combinations of appliances, storage, and workspaces; the fixture (a hybrid of architecture and furniture) was a hallmark of this “continuous kitchen”. The compactor was a fixture in every way: seamlessly integrated into continuous kitchen architecture, yet distinct and removable.

The trash compactor could disappear into the continuous kitchen, and companies put a special emphasis on its front panel being able to match any decor. While the first Trash Masher was only available in white, avocado, and copper tone, subsequent compactors offered reversible and interchangeable front panels. The 1984 “Use & Care Guide” for Whirlpool’s Trash Masher, encouraged the homemaker to “match your kitchen’s color scheme by replacing the color panel with your own creation (wallpaper, paneling).” While this created harmony, it also helped disguise the existence of waste. Not coincidentally, open floor plans were rising in popularity 1970s, where the kitchen served as a continuation of living and entertaining space, rather than an isolated and distinct room of its own. Once exposed to view from a larger percentage of the house, integrated and coherent kitchen design became even more important.

The visibility of work and of waste disposal in the kitchen was also permeated with class connotations, in ways that last till today. Over the twentieth century, the kitchen went from an isolated site of household economic production to a drudgery-free work and living zone; such conspicuous leisure is dependent on keeping trash out of sight and out of mind. Even today, it is a mark of luxury to conceal major kitchen appliances, as The Onion satirical newspaper pointed out with their 2014 headline: 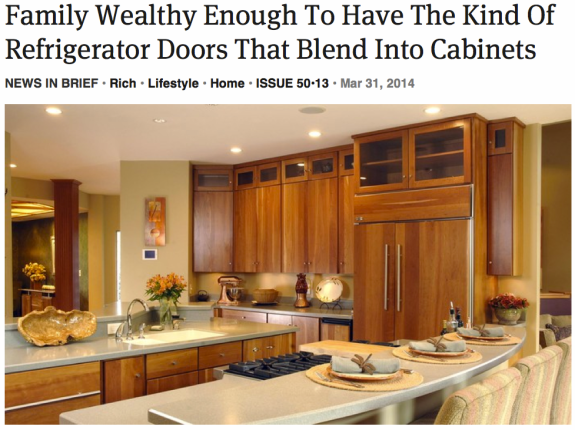 “Family Wealthy Enough To Have The Kind Of Refrigerator Doors That Blend Into Cabinets.” The Onion. March 31, 2014. http://www.theonion.com/articles/family-wealthy-enough-to-have-the-kind-of-refriger,35662/.