Class is paramount when talking about waste in the home; different socio-economic groups consider different objects trash, and use different means to dispose of that trash. The compactor illustrates this well, since housing reports across the 1990s show that the vast majority of trash compactors were located in the detached single-family houses of white homeowners. Why didn’t  Americans of color and Americans living in duplexes, apartments, and mobile homes have compactors? 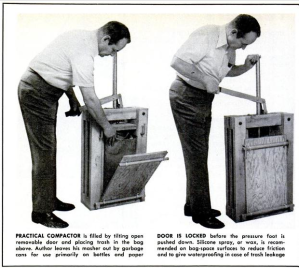 Recognizing their readers would not likely have the finances for a pre-made compactor, Mechanix Illustrated offered directions to make this version at home for a mere $15 in raw materials. “Trash Compactor from a Kit,” Mechanix Illustrated, October 1, 1972.

Compactors were restricted to the wealthy, middle class white American household largely because their price was prohibitive; when Whirlpool first released the Trash Masher in 1969 it sold for just over $200. They cost well over twice as much as garbage disposers, even the cheapest brands. But per chase and installation was just the beginning; the compactor was hardly a one-time investment, with the continued purchases of deodorizer inserts, and brand-specific compactor bags – not to mention installation costs and inevitable maintenance.  Furthermore, the electricity bill for operation was a concern for consumers, albeit one manufacturers tried to allay by reporting that, “Compactors do not use much energy – electricity to operate the appliance costs only about 60 cents a year.”

Through 1980s, the manufacturers of compactors worked to target this small upper-class demographic. Compactors were highlighted as parts of high-end appliance lines, such as the 1985 Admiral Continental Line of kitchen appliances that included not only a trash-compactor, but also an icemaker that could make up to 51 pounds of ice a day. In  October 1984, Ben Karlson of a design firm outside Chicago, working on “the high end of high end,”  spoke to Ted DuPont of The Weekly Home Furnishings Newspaper. Karlson described his typical customer expenditures, including a trash compactor for around $500. In 1991, even the luxury cooking appliance brand Viking came out with a trash compactor, which it carries to this day. 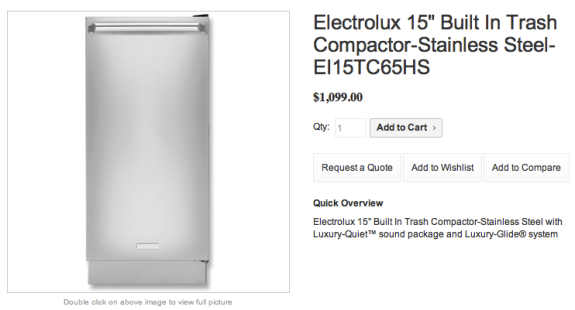