←Return to Table of Contents 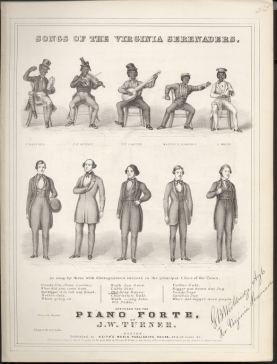 Sheet music cover, “Songs of the Virginia Serenaders: De Ole Grey Goose.” Members of the troupe are pictured in and out of blackface, making clear that they were respectable gentlemen offstage. In reality, minstrels often fell short of that distinction. A property manager at one theater recalled that his men, being “lazy fellows,” often wore their paper collars out onto the street. (Courtesy of the Lester S. Levy Collection of Sheet Music, The Sheridan Libraries, The Johns Hopkins University)

Andrews, who had grown up on a Georgia plantation, thought that the black slaves there were, as a class, more noble than white dandies who put on paper collars. The clerks who patronized minstrel shows in Northern cities thought just the opposite. Paper collars were more than a convenience to the performers who blackened their faces with burnt cork and grease; they became a part of the blackface persona. Blackface had a long history of using racial disguise as an opportunity to act out social anxieties of all kinds. But beginning around the the 1830s, those anxieties often had to do with racial distinction itself. In Northern cities, white workingmen and junior clerks both began to resent free blacks, who competed for the same jobs and social opportunities. By the 1840s, racial performances had crystallized into specific and highly derogatory stereotypes. By measuring themselves against the black personas on stage, white audiences could overcome social differences and unify around their shared whiteness.

The blackface characters of mid-century were slow-witted, physically awkward, and prone to all manner of vices. If the white dandy appeared ridiculous for dressing above his class, the black dandy appeared even more so. Tall collars immobilized the neck, enforced a straight posture, and drew attention toward the face. For white elites, this was a badge of distinction. Their daily activities required neither extensive mobility nor bending over a desk, and their faces were the essence of their identity in business and social dealings alike. But if the face reflected one’s nature, highlighting a black face had a perverse meaning of its own. 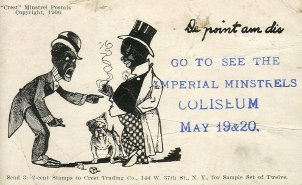 Postcard, “De Point am Dis,” from a series published by Crest Trading Company, 1906. Collars and cuffs are on prominent display, and the stiff posture they enforce is evident in the figure on the left.

To emphasize the pretensions of cladding black bodies in formal attire, collars and cuffs were often oversized in minstrel costumes and popular illustrations. The exaggerated expanses of white paper set black faces and hands into noticeable relief: monkey-like heads seemed to pop out the ends of tight collars, and the stiff posture the collars inspired was made to seem ironic, for black bodies were allegedly prone to slouching. Even more than on middling clerks, blackface parody made these trappings of gentility seem cheap and external. Judy, the London satire magazine, ruminated in 1884 that “the majority of black men are not at all particular about their style of dress . . . so long as they possess the proverbial high hat and paper collar.”

The racial imagination had a way of amplifying white society’s anxieties over clothing and the class distinctions it represented. One minstrel sketch from the end of the century skewered the old question of how long to wear a paper collar before it became a hygiene liability. “He’s packing his trunk,” one character says of his brother—“there goes the same old paper collar I lent him.” Genteel people did not, of course, borrow something so personal and disposable, nor would they start off a transatlantic voyage with an already-soiled collar. As Americans turned an eye to colonizing and, as they saw it, civilizing nations in Africa and the South Pacific, the same racial caricatures turned up in a new context. The Journal of the American Geographical Society of New York looked with amusement at South African diamond miners who put on their British colonizers’ clothing. “Everything the white man wears is to them in the light of ornament,” the observer reported. “Every cast-aside paper collar is seized and donned . . . in ignorance of its comicality.”

Trade card for Babbitts Best soap, used in the 1880s and 1890s. The company’s long-running slogans, “Soap for All Nations” and “Cleanliness is the Scale of Civilization,” speak to United States’ imperialist outlook at the turn of the twentieth century. American industry and its products were seen as the salvation of the world’s less developed peoples, pictured around the edges of the card. (Courtesy of the Trustees of the Boston Public Library, Print Department)

Elsewhere in the American press, black South Africa offered a safe space in which to voice doubts about the state of society at home. Stories circulated about a tribal chief there who had adopted western customs and organized a local pageant to show off his civility. Midway through a speech, his paper collar “broke loose at one side and tickled his ear.” Batting it down to no avail, the chief exhausted his patience and tore the collar off, along with the rest of his English-made clothes. Then he turned and laid an axe to the dwelling he had built according to English standards of tidiness. “The whole thing is a lie!” he exclaimed; “I’m tired of their houses and their clothes and their false, mincing ways!” And he fled into the mountains where his heart could “go out to the woods to get its breath”—an instance of what the column’s title proclaimed as “nature asserting itself.” The piece continued on toward a moral: “Wiser men than the poor savage have found civilization too full of ‘little lies,’ and longed to back to nature for a free breath.” It was not just that Africans were ill-disposed to take on European manners; they were a convenient allegory for westerners’ misgivings about their own ways of life.