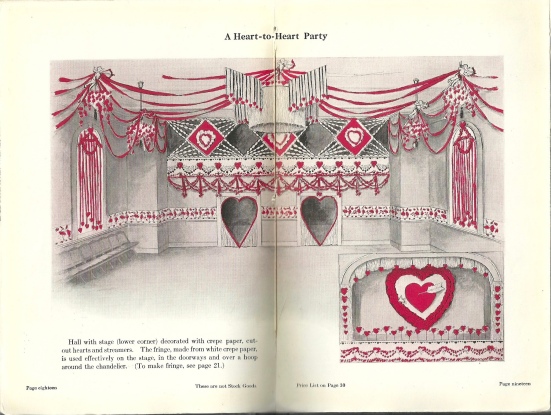 The Dennison Party Book from 1922 showed how to decorate large banquet halls.

Crepe paper reached its peak popularity for entertainment and parties in the 1920s. During this decade, the Eighteenth Amendment, the prohibition of alcohol, went into effect. Prohibition was the result of efforts by anti-alcohol activists who petitioned to outlaw the substance at the national level. Many Americans drank in illegal bars known as “speakeasies” across the United States. However, many opted to follow the anti-alcohol law. Others drank privately in their homes.[1] Crepe paper parties intersected with Prohibition, the constructed play world a trade-off for inebriation.

During the 1920s, the social world of women was punctuated by and saturated with crepe paper as décor, especially as they rejected the domestic leanings of their mothers and grandmothers in favor of newer and more efficient ways of keeping home.[2] Within these saturated worlds, the tension between modernity and the Roaring Twenties was juxtaposed against traditional elements of social gatherings: costumes, luncheon tablescapes, and party decorations. Crepe paper existed at the intersection of these social changes. This was part of the “rival perceptions of the 1920s” that historian Warren Susman described.[3] 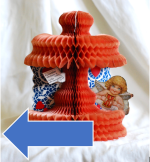