By 1900, gum situated itself into the habits and rituals of everyday existence, satisfying what Michael Redclift called a “human need every bit as important as the economist’s ‘utility’ function.” While gum’s purpose eluded most people, marketing and advertisements in the early twentieth century shaped how consumers thought of themselves as gum chewers. This was particularly true for women. 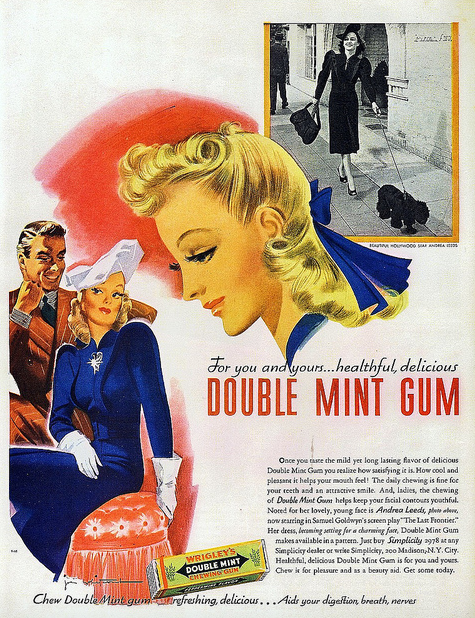 At the turn of the century, according to Harper’s, chewing gum was “mainly a female accomplishment.” The few men who chewed gum were “supposed to do so by reason of gallantry.” Companies marketed gum as an accessory to a modern female lifestyle, tied to glamour and mobility. A woman on the go, who presumably smoked, drank and kissed, needed gum to maintain standards of hygiene and appearance. Advertisements featuring elegant older women, even famous Hollywood actresses, tied gum to sex in a manner that appealed to both men and women: men might be attracted to a gum-chewing woman because it suggested that she wasn’t prim and proper, while woman craved the small but illicit thrill of challenging propriety and notions of feminine behavior.

Chewing gum was striking in its popularity among turn-of-the-century college women. In 1892, Wrigley even named a brand of gum Vassar after this target demographic, signaling that gum-chewing college girls were very much present in the public eye. 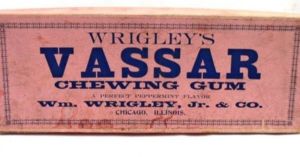 However, this did not stop newspapers all over the United States from ridiculing the Vassar girls and their chewing habits.[1] While women continued to enjoy chewing gum, they paid the price through the public’s scrutiny. Opposition to the advertising campaigns appeared in popular literature, where chewing, blowing bubbles, and spitting out gum were decried. One character in a 1912 Scribner’s sketch complained about the “inelegant, unladylike, and disfiguring habit of chewing gum in which the rank and files of American women persistently indulge.”[2]

By the 1920s, however, the eponymous “Flapper Girl” scoffed at stuffy pretensions and chewed gum with abandon. Gum companies then focused their advertising on middle and upper-class women with more refined sensibilities. Their goal was to change gum’s reputation from a product considered “unladylike” to something upmarket and even glamorous. This shift began in the mid-1930s, when Americans looked to advertising print culture as a roadmap for daily life. A 1938 ad featuring actress Claudette Colbert reinforced beauty standards by making gum synonymous with good health, white teeth and a perfect complexion. Gum became marketed less as a sweet treat, and more as a feminine product. This enabled gum manufacturers to tap into the booming beauty industry’s consumer base of middle and upper-class women.

Wrigley invoked the “Fletcherism” movement with ads that drew attention to women’s teeth and jaws as sources of feminine beauty. Dental health did not became a cultural priority until the late twentieth-century, so for many people gum served as an all-in-one solution for problems related to breath, teeth and gums.

What ads promised or portrayed did not always align with the lived experiences of women, and the properties of gum as a commodity, treat, and disposable product complicated its relationship to gender. Etiquette advisor Emily Post objected to chewing gum in 1922, but in the 1936 brochure Chewing Gum Etiquette, Helen Ufford argued that women were free to chew, but should be sensible about where and when it was appropriate: “we remember that that chewing gum is like chewing anything else…we keep our lips closed, chew noiselessly, inconspicuously.”[3]

Dentyne Gum ads from the early to mid-twentieth century reinforced the acceptability of young women chewing gum, and even encouraged women to chew gum as a symbol of their spirited (and sexual) independence. Of course, these ads were also selling the notion that women needed to have white teeth and fresh breath in order to be desirable. 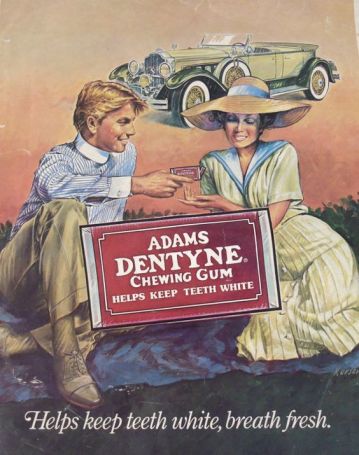 Most gum advertisements in the early to mid-1900s did not cater to men, presumably because chewing needed no commercialized justification. Men chewed gum for many of the same reasons women did (medicinal and hygienic properties being chief among them), but working class men–especially those in industrial factories–found that it curbed the desire to smoke while on the job. Moreover, chewing gum provided a somewhat unorthodox way of bucking authority and could be chewed for long periods while multitasking. Thus, while chewing gum furnished women with the impression of freedom from gender roles, it simultaneously allowed men to hold tighter to their own. 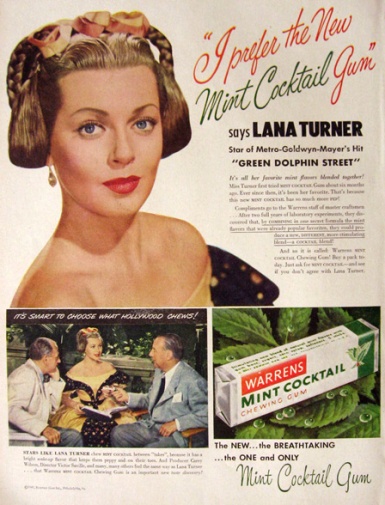 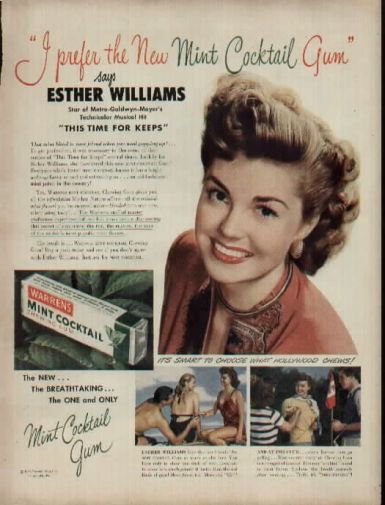 In 1947, Hollywood actresses like Lana Turner and Esther Williams promoted “Cocktail Gum”, linking chewing gum to upscale leisure and adult habits of alcoholic consumption. These would be among the last generation of gum ads that specifically targeted adult women, sans family, as gum consumers.

Unlike other “guilty pleasure” food products that were generally discouraged for women, the consumption of gum couldn’t be hidden. Chewing, blowing bubbles and spitting out gum made women visible in a way that revealed their physicality and drew attention to their faces and mouths. The unseemly display of a man chewing gum could be overlooked, tolerated and even indulged, depending on the chewer. For women, no such compromise existed. Even so, women continued to chew gum as a small act of resistance to gender rules; for reasons of simple enjoyment and because they, along with everyone else, were taken in by clever advertising. 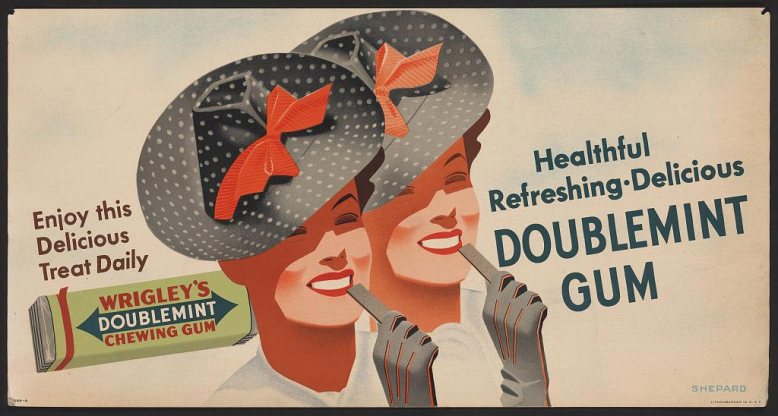 [1] Kerry Segrave, Chewing Gum in America, 54. The connection between gum chewing and college students continued into the twentieth century. A 1929 newspaper reported that coeds at Minnesota spent more than $500 weekly on chewing gum, averaging over 10,000 packages a week.Vassar Miscellany News, XIII, no. 28 (February 9, 1929).

[2] “Of His Own Household” Scribner’s Magazine, Volume 51. p.595. In a 1917 issue of The Farm Journal, an elderly lady “of means” joined the conversation over women and gum chewing: “Twenty years ago…everyone know that it was coarse and unladylike to chew gum in public, but to-day girls and women do it who are refined in every other particular…Certainly no gentle girl would be guilty of chewing gum in a public place again if she could see just how ludicrous she becomes while performing the act.” Farm Journal 244, no. 62 (March, 1917).