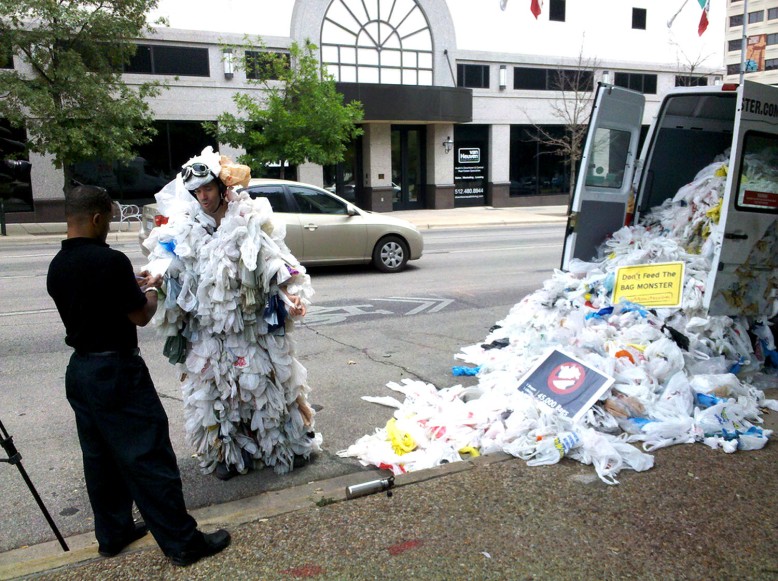 An anti-plastic bag activist in Austin, Texas Via. Business Ethics

“Since large human settlements came into existence, we have been generally either very careless with our waste by dumping them into the streets, the air, water, and our backyards, or downright unfair by deliberately placing them in close proximity to those least powerful segments of society.” – David Pellow, Author of Garbage Wars: The Struggle for Environmental Justice in Chicago [1]

In 1984, as supermarkets began to embrace the plastic bag and the environmental debate ensued, so did the question of customer satisfaction. From the start, some customers were opposed to plastic because it wasn’t biodegradable, but manufacturers were quick to say that “the resin used to make plastic grocery bags is a byproduct of natural gas,” thus using 2.5 times less energy is used to make plastic bags in comparison to paper. [2] Current debates about the plastic bag consider many of the same issues. People across the spectrum of environmental activism have joined the conversation. Internet users are actively bombarded with videos and photos of animals being subjected to painful and untimely deaths at the hands of plastic in oceans, landfills, sewer drains, birds’ nests, and other sites. The Internet age has further amplified this complicated fight to change how we interact with the plastic bag.

Kenya plastic bag ban comes into force after years of delays Via. BBC

Over the past few decades, environmental activists have challenged the plastic bag’s impact on local and international levels. Factories across the globe have become a target for activists looking to reduce carbon emissions through a hodge-podge of bans on many scales. After failing to pass bans in 2007 and 2011, Kenya has taken stronger actions against the use of plastic bags. In 2017, “new regulations” were put in place that now allow for “a fine of $19,000 to $38,000 or a four-year jail term for those manufacturing or importing plastic bags in Kenya.” [3] Ireland has also emerged as a global leader. In 2002 the government passed a bag tax that was “22-euro cents, about 33 U.S. cents” per bag. That led to a “94 percent drop in plastic bag use” within the first few weeks, and it led to a cultural shift within the nation. Ultimately, plastic bags became “socially unacceptable—on par with…not cleaning up after your dog.” [4] Even countries that are dealing with much larger humanitarian struggles, as in the case of Rwanda, have taken steps to rid themselves of plastic bags. While they’re not necessarily interested in forcing consumers to switch to reusable bags, “businesses have been forced to replace plastic carrier bags with paper ones.” Restrictions in bag laws have led to a change in scenery; both tourists and citizens of the country have referred to Rwanda’s capital, Kigali as “one of the most beautiful cities in Africa.” [5]

In the United States, Seattle, Washington put a ban into place in 2012. The city set up a series of protocol to encourage stores to embrace a plastic bag-free environment. Anyone caught distributing plastic bags in Seattle is given a warning, and if found guilty after the warning, that person may receive a $250 citation. Of course, activism comes in all forms: in courtrooms, the press, public demonstrations, and even in making art. However, the U.S. appears to be trailing in last place when it comes to regulating the bag. 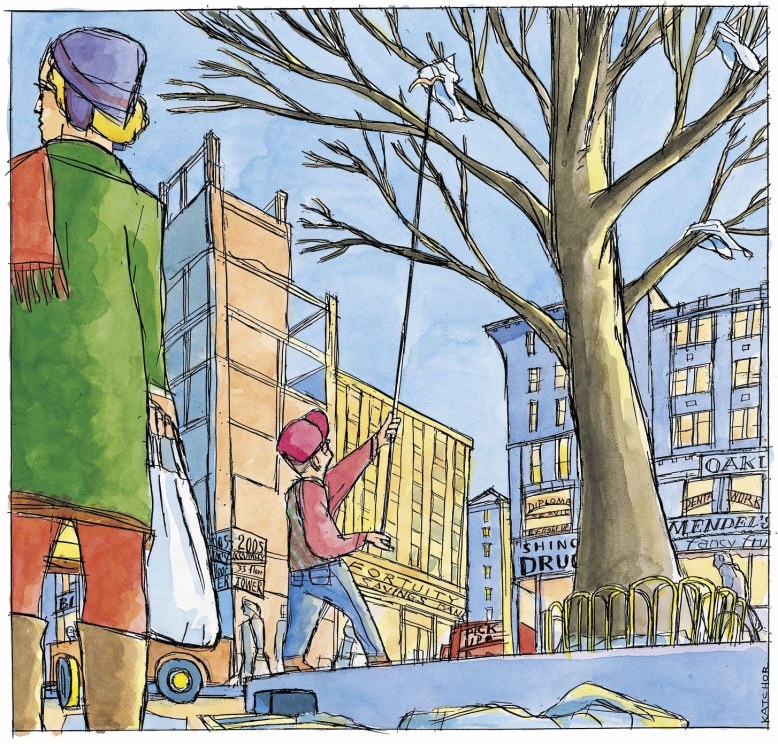 “A lot of what ends up in Manhattan’s trees falls into them from above or has been thrown down into them. People get mad and chuck other people’s stuff out the window.” Via New Yorker Magazine. Illustration by Ben Katchor.

Ian Frazier of the New Yorker is a veteran in the fight against the bag. Starting in the early 1993, Frazier declared his opposition to bags when he noticed that they had begun to inhabit all of the trees in his Brooklyn neighborhood. This situation drove Frazier to collaborate with his friend, New York City jeweler Tim McClelland, to invent “the bag snagger, a prong-and-hook device that, when attached to a long pole, removes bags and other debris from trees.” [6] Inventing the object was only the start. Creating a tool that allowed everyone to get involved, accompanied by Frazier’s magazine audience, allowed the pair to participate in and publicize cleanups across the country. Frazier’s reporting has highlighted activists across the nation. One of his most notable profiles was in a 2016 article titled The Bag Bill, which focused on Jennie Romer, the “country’s leading expert in the plastic-bag law.” [7] Romer is known for her work in California, where she joined the environmental movement after college and established her foundation as an anti-bag activist. Since then, she has participated in movements in Seattle, New York City, San Jose and San Francisco. Not all of these efforts have been successful, but there has been a growing anti-bag movement across the nation. [8] 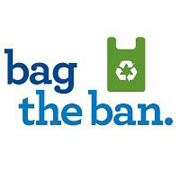 Frazier’s work brought attention to opposition activities conducted by the American Chemistry Council and American Progressive Bag Alliance. These agencies appear to work with missions of solving “some of the biggest challenges facing our nation and our world” [9] and “represent a thriving and resourceful industry.” [10] However, they are notorious for supporting the pro-bag movement, going as far as providing millions of dollars to subdue anti-bag laws and organizing in cities across the United States

Bans around the World

Map of Phase-out of lightweight plastic bags Via. Wikipedia

Bag bans are productive, but many may be asking: how can one person make a difference? We can start by altering our shopping habits. Take notes from the people of Ireland who keep reusable bags “in the office and the back of their cars.” [11] A range of consumer products have been created in order to combat the use of plastic bags. Baggu, a brand that started in 2007, has created a product “based on the construction of the plastic grocery bag,” made out of nylon, that “can hold 2–3 times more than a traditional grocery bag.” Baggu has a range of bags, but the T-shirt style bag costs between $8-14 depending on the size and pattern. [12]

Simple Ecology was created in 2008 and refers to itself as a “family-owned corporation” that sells “premium Eco-Friendly products to environmentally concerned consumers.” In order to create an eco-friendly company, they seek to minimize packaging of their products and shipping. Simple Ecology has over a dozen reusable bags on their website, but the three most popular bags are the “Organic Cotton Reusable Market and Beach String Bag” for $5.95, “Organic Canvas & Jute X-Large Tote & Grocery Bags” for $5.95, and the Muslin Reusable Produce Bags for $3.75 and up. All of these bags come in a range of sizes and can be purchased in bulk. [13] Lastly, for those who are interested in the aesthetic of the paper bag but are opposed to the environmental repercussions and limitations of a paper bag’s life, there is a brand called Peg and Awl. Peg and Awl produce an assortment of household objects from reclaimed materials. Their website offers any “size to suit all of your shopping needs, no matter how specialized.” [14] Peg and Awl products are rather expensive, so incorporating their products into daily rotation may not be feasible or practical for people who are interested in preserving the earth and saving money. These few options are just a small portion of what’s available for people looking to step away from plastic bags. They aren’t definitive solutions, but they enhance our understanding of what’s available to replace the plastic bag.