“Take A neck of mutton & cut it 2 ribbs together. Bea[t] or Chopp it. Ye bones must be broaken. Then season it with nutmegg, pepper, & salt.” 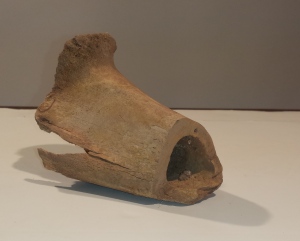 So begins the first recipe in a manuscript cookbook that descended in the family of Martha Washington. Using bones to flavor a broth or stew is well-known to cooks. What became of the bones, shells, and other animal parts after butchering and cooking? Some bones and other left-over animal parts (including antlers and horns) were used to make utilitarian objects such as corn husking pegs, flatware handles, combs, toothbrushes, powder horns, and drinking cups.

Zooarchaeology helps us learn what early Americans did with bones, shells, and other faunal (animal) remains that were not converted into useful objects. Analysis can reveal which animals were eaten and in what relative quantities as well as which parts were consumed and how the food was prepared. It can also shed light on disposal practices as well as the personal preferences and socioeconomic status of the property’s inhabitants. Faunal analysis was conducted on 1,212 bone and shell fragments excavated at The Speaker’s House in 2006 and 2007. The bones showed signs of butchering marks as well as trampling and gnawing by dogs and rodents—indicating that the bones were exposed above ground level for some length of time. Identifiable species include clams, oysters, mussels, catfish, cod, chicken, turkey, duck, cow, pig, sheep, and rabbit. Pig bones and oyster shells were the most common types found. Few scapulae or cranial bones were found, suggesting that the Muhlenbergs procured meat from elsewhere rather than did their own butchering. This is corroborated by Henry Muhlenberg’s journals, in which he noted receiving gifts of food rather than cash for his salary and that the family usually bought meat from a neighbor. 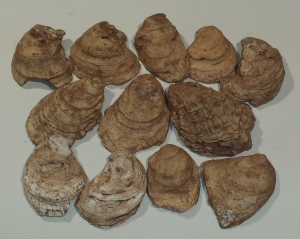 Pork was the preferred meat among Germans because hogs were easy to raise and a wide variety of products could be made from them. Shellfish was another type of meat consumed by the Muhlenbergs. Frederick Muhlenberg hosted oyster suppers for his political constituents, which may explain the large quantity of shells found at The Speaker’s House. Oysters were sent to Trappe from Philadelphia by the bushel. Period cookbooks include recipes for fried oysters, scalloped oysters, stuffed oysters, pickled oysters, oyster stew, and oysters baked in loaves.

The hard work of food preparation took place in a variety of locations within and near the Muhlenbergs’ households. Tasks such as plucking chickens were likely done outside.  Due to the mess, noise, and smells, food was prepared in a rear kitchen wing far removed from the primary living quarters.  Servants would have carried dishes into the main house for dining, possibly even to the second floor where the largest and most formal room was located. Although the Muhlenberg women were involved in food preparation, much of the labor was done by servants. Both households employed hired maids, German-speaking indentured servants, and enslaved servants.

Return to Trash in Early America